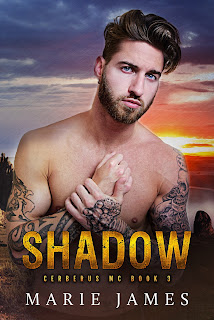 Morrison “Shadow” Griggs, VP of the Cerberus MC, is a force to be reckoned with. Women fall at his feet, willing to do almost anything for a night with him.

Misty Bowen is the exception. She’s young and impressionable, but with her religious upbringing, she’s able to resist Shadow’s advances… for a while at least.

Never one to look back on past conquests, Shadow is surprised that he’s intrigued by Misty, which only grows more when she seems to be done with him without a word.

Being ghosted by a twenty-one-year-old is not the norm where he’s concerned, and the rejection doesn’t sit right with him.

Life goes on, however, until Misty shows up on the doorstep of the Cerberus MC clubhouse with a surprise that rocks his entire world off of its axis.

With only the clothes on her back and the consequences of her lies and deceit, Misty needs help now more than she ever has. Alone in the world and desperate for help, she turns to the one man she thought she’d never see again.

Shadow would never turn his back on a woman in need, but his inability to forgive has always been his main character flaw. Unintended circumstances have cast Misty into his life, but will he have the ability to keep his distance when her situation necessitates a closeness he’s never dreamed of having with a woman?

So I have to say I actually got mixed up with these books and by accident read this book first after Kincaid, thinking that Shadow was the second book in the series. So when I started reading it I got a little confused and felt as if I was missing something. I quickly realized my error and realized that this was the 3rd book in the series. But went on ahead and read it anyways before reading Kid's book.Look I liked what I saw of Shadow in the first book. I liked that we got to know him a little bit better. Morrison "Shadow" Griggs is the VP of the Cerberus MC and not a man who is looking to settle down. That is until his life takes a turn and he finds out he has a son. Though I thought he took the surprise news of being a father better than most there were times I found him to be an ar$e.I liked Misty and thought she did the best she could for the situation she found herself in and doing by herself.I have to say I really like this series. But at times feel like its missing something. Not that that's a bad thing. This series is a lighter read than I'm used to with MC series.I'm giving this book 4 Stars out of 5!!!!

Disclaimer: I received an arc of this book from Give Me Books Promotions for my honest opinion. The opinions in this post are 100% of Busy Bumble Bee Book Reviews and may differ from others.