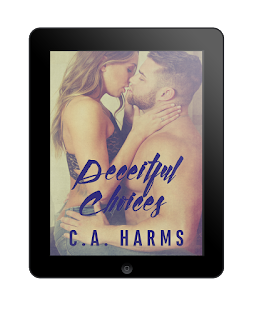 Some lies you just can’t come back from.
The damage is too deep.

The effects are too strong, and the path they lead you on can be devastating.

One lie only led to another as Lindsay tried to be someone she wasn’t. She wanted just one moment to pretend she didn’t live the life she had been cursed with.

She wanted to live without regret.

Live for the moment.

She wanted to laugh and smile without feeling as if at any moment something or someone would corrupt that happiness. But all lies have a way of resurfacing. Those deceitful words can come back to haunt you, leaving you as the one heartbroken and alone.

Zack had taken a trip with a fellow Navy SEAL.

Just a weekend away to regroup. Never had he intended to find the girl who would jumpstart his heart.

Only then to destroy it.

But the shattered pieces of his trust weren’t the only things he left behind when he walked away from Lindsay. There was now an innocent life that had been thrown in to the mix.

But Lindsay wasn’t the only one who lied...
The odds were stacked against them. There was someone doing everything they could to keep them apart.

But when the truth is told, and those secrets are revealed, they must decide if they have what it takes…

To survive the deceit.

As always I love anything from author C.A. Harms and also look forward to her next release. Lucky she comes out with them very quickly like another author I love. I have to say though I wasn't sure what to expect with this book.

Look I liked Lindsay. She's a young girl of 17 years old when we meet her. She's been dealt a pair of sh*t ar$e parents in life and has to grow up quickly. Though she just wants one night while she is on a trip with her best friend to be a typical teenager, even though she lies right off the bat and tells Zack she's older. I thought Lindsay did her best as she could with the circumstances she found herself in after getting kicked out of her parents, being pregnant and thinking Zack didn't want anything to do with his son.

Boy I really think the moral of this story is Don't Lie. Just from 1 lie set off a series off other lies that just snowballed from there. Where both of these characters could have saved themselves from the heartbreak and time away from each other.


Disclaimer: I received an arc of this book from enticing journey book promotions for my honest opinion. The opinions in this post are 100% of Busy Bumble Bee's and may differ from others.

Posted by Busy Bumble Bee Book Reviews at 10:15 AM