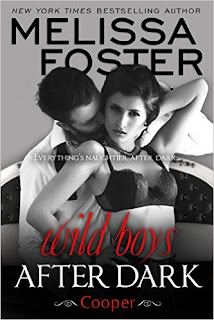 Four years ago at a film festival, Cici Fine met Cooper Wild, a man who turned her world upside down in the span of one deliciously perfect week. He was everything she'd ever dreamed of: sinfully sexy, intelligent, and incredibly loving. When the festival ended, they returned to their own hometowns with promises of forever. But Cooper disappeared, and Cici was left to raise the daughter he never knew about alone.
Cooper is finally thinking straight after years of being lost in grief from the tragedy that killed his father and left his mother blind. Now he's on a mission to find the woman he left behind-the only woman he's ever loved.
But Cici Fine is no longer a naive young girl. She's a savvy businesswoman with big responsibilities, on the cusp of a life-changing move. When fate brings the two together, they'll put the old adage to the test and find out if love really can conquer all.

This is the fourth and final book in the Wild Boys After Dark series. I have thoroughly enjoyed this series. Even though I was a little dissapointed with the last book. I was hoping this book would pick it back up. And this book had two of my favorite things second chance and secret kids.

This book follows Cooper and CiCi and I really enjoyed them.

I loved Cooper and have your heartstrings pull for him. After spending the perfect week with CiCi he finds himself dealing with the death of his father. After finding Cici again I loved his explanation to him.

I really liked CiCi. She has been dealing with the hurt of Cooper up and leaving with no explanation and raising their daughter on her own.

I really enjoyed this boo and the ending to this series. I have enjoyed the Wild Boys throughout this whole series.

Disclaimer: I received an arc of this book from tasty book tours for my honest review. The opinions in this post are 100% of my own and may differ from others.
Posted by Busy Bumble Bee Book Reviews at 8:27 PM