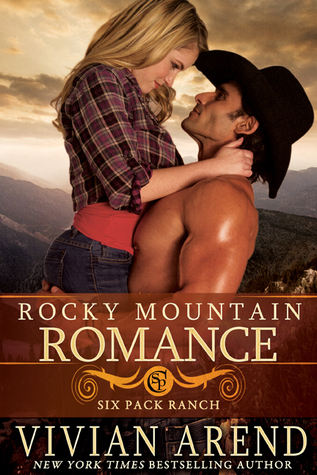 
Title: Rocky Mountain Romance
Author: Vivian Arend
Genre: Contemporary Romance
Summary:
Second chances are the sweetest—and the hottest.
It took a spectacularly embarrassing break-up to knock Steve Moonshine Coleman off his lazy butt. In the ten months since that night, he's changed his ways. Now that Melody's back in town, it's time for this sweet-talking cowboy to convince her to get back in the saddle with him.
A return to her veterinary position in Rocky Mountain House was always in the cards for Melody Langley. Getting back together with Steve? Never part of the plan. He had lots of potential but zero ambition, and there's no way she'll accept anything less than a man who can keep up with her, in and out of bed.
But the new-and-improved cowboy is impossible to resist, so Melody issues a challenge. Three months to prove he's reformed. Three months of Steve orchestrating one sexual indulgence after another--‪wicked distractions from the old boys' club Melody faces at work and Steve's growing responsibilities‬.
He's got one shot to prove with more than words what's in his heart and soul.
You can purchase Rocky Mountain Romance on Amazon, B & N, Kobo and iBooks. 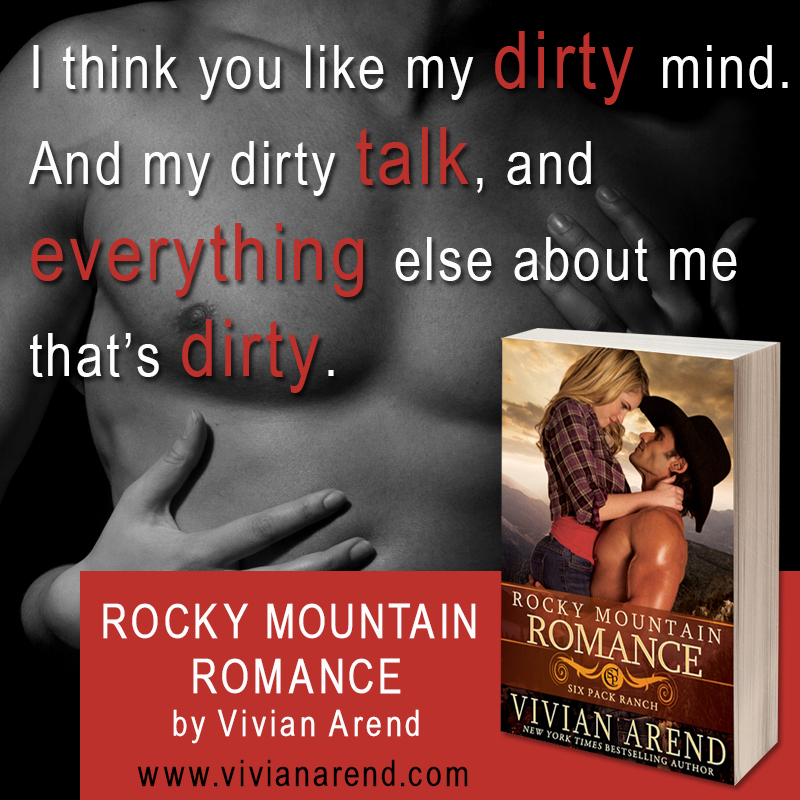 Excerpt:
Melody went with Steve willingly, around the side of the barn to where his truck and a horse trailer waited. He helped her into the driver side and she slid into the middle seat, checking her watch to make sure she didn’t get too far behind schedule. No way did she want another repeat of her hellish Monday.
“I’ve got thirty minutes tops, otherwise I need to phone the clinic and let them know I’ll be late.”
“You won’t be late,” he promised.
They rattled down a short side road but instead of turning toward the highway, Steve took them along a back trail that led through the trees into a clearing at the side of wide-open ranch land. Nothing lay before them but miles of low rolling hills. To the west, the Rocky Mountains rose above to the sky, the craggy peaks decorated with a tiny dusting of white in the highest cracks and crannies. The tree line broke off to expose granite greys and flashes of white quartz.
It was an amazing view, and she was glad it was something she got to see every day of her life.
She was still staring in admiration when Steve parked the truck and jerked open the door.
Melody followed him out, but couldn’t see any signs of an animal that needed attention.
“Do you want me to be a veterinary to the squirrels?” she teased.
He whirled, catching her under the hips and pulling her against his body so he could kiss her fiercely. Her back pressed against the cold metal of the horse trailer as his overheated body met hers.
“You’re driving me crazy,” he confessed when he finally let her breathe. “I’ve been aching to touch you since the weekend. I need to be inside you.”
Melody didn’t have the words to protest, especially not when he put his lips to her neck and sucked. A flash of heat went from his mouth through her entire system, and she clutched his shoulders.
She was in motion again, this time her feet on the ground as his hands scrambled at her belt buckle. “I want you right now,” he demanded.
The clock was ticking, but his hands were doing incredible things even as Melody tried to make the right decision.
“Oh, God. Here? You’re not serious, Steve, right out in the open—?”
He shoved her jeans down to her ankles. He stripped off his shirt, dropping it on top of the wheel guard of the trailer while she stood, pants around her ankles, admiring the broad bands of muscles on his torso.
Then she was on top of his shirt, her knees spread wide as he pulled her forward to his eager mouth. Her ankles were trapped together by her pants, but Steve didn’t seem to care.
Melody shoved her hands into his hair to catch her balance, but there was no catching her breath as he ate greedily. His tongue danced over her clit until she was gasping, the sound loud in contrast to the wind in the trees behind them. Everything that had to be done that day vanished as her world closed on this time, this place. 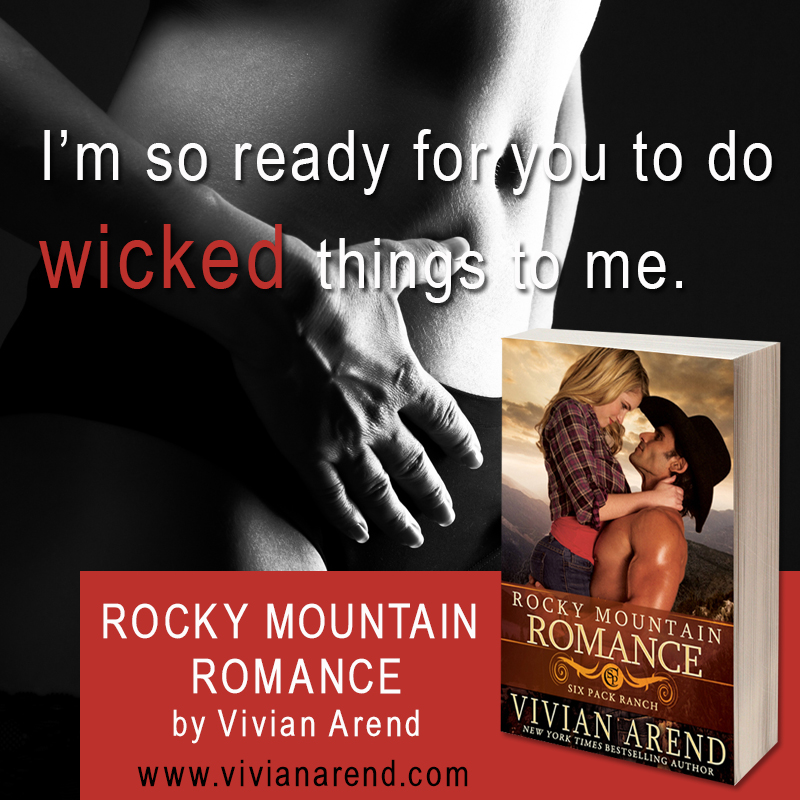 Vivian Arend in one word: Adventurous. In a sentence: Willing to try just about anything once. That wide-eyed attitude has taken her around North America, through parts of Europe, and into Central and South America, often with no running water.

Her optimistic outlook meant when challenged to write a book, she gave it a shot, and discovered creating worlds to play in was nearly as addictive as traveling the real one. Now a New York Times and USA bestselling author of over 40 novels and short stories in both contemporary and paranormal genres, Vivian continues to explore, write and otherwise keep herself well entertained.

You can find out more about author Vivian Arend and her books on her Website. You can also connect with her on Facebook, Twitter, and on Goodreads. 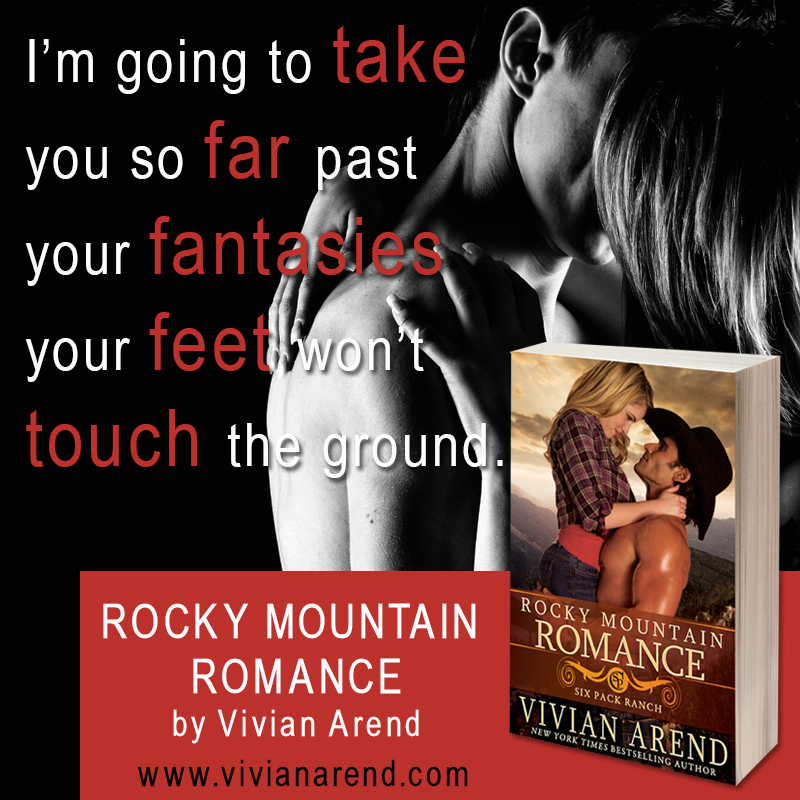 a Rafflecopter giveaway
Posted by Unknown at 10:29 AM