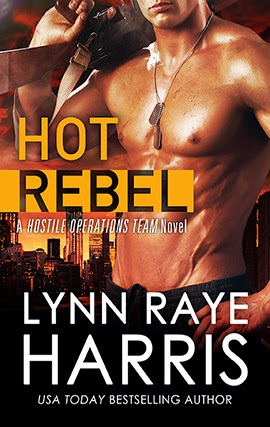 A rebel on the run…

Victoria Royal is a traitor. Or so the U.S. government believes. Victoria was once a promising sniper in the Army, but now she’s gone rogue—worse, she’s just landed in the middle of a Hostile Operations Team mission in the desert and blasted it all to hell.

Nick “Brandy” Brandon doesn’t expect to run into Victoria when he’s bugging out from a mission gone wrong. It’s been more than three years since she disappeared from the sniper course they were in together, and he’s finally stopped thinking about her killer curves and smart mouth.

But now she’s back—and she’s far more dangerous than Nick ever believed possible… Is she really a traitor? Or is there something more at stake? He has to decide fast—because time’s running out and too many lives hang in the balance…

I was so excited to be reading the next book in the HOT Series by Lynn Raye Harris. I have fallen for these Military bad boys in this series. So when I was given the chance to read the next one I jumped on it. As I said in my review of Hot Shot, which you can read the full review of that book Here. That is the first book I had read in this series, even though it had been book five. But also as I said in that review I went back and got the other books and caught up. All of the books can be read as Stand Alones which I like, so you won't be too confused if you start later in the series. You just might not understand who everybody is or what it is they do, unless you go back and read the other books.

Like all the other books in this series this book starts off with a bang and grabs your attention right away and holds it till the end. There's action, a little bit of mystery, a little bit of drama, a little bit of sexiness. Oh and can't forget about the boy's on the Hot team thrown into the mix.

Nick "Brandy" Brandon is one of those guy's you know you shouldn't like, but you end up liking anyway. He's the cocky player type, who thinks any girl would fall at his feet. But he is also a intelligent sniper who knows how to do his job and do it well. I wouldn't mind falling for the likes of Nick. But I also admire Nick for standing up against his parents for something he believes in.

Victoria is independent, sassy and likes to run her mouth a lot. She's also a little bit stubborn and definitely will go against the norm. But you quickly realize that Victoria is very loyal when she wants to be. And definitely believes in going after something, especially going after her sister, even if it means for her to go against her own country.

I love this series and again can not wait until the next one comes out. I would give this book a 4.5 out of 5 stars. And would recommend it to anyone who loves the sexy Military Alpha Male type books.

Hot Rebel comes out on Sept. 29th you can Pre-Order on Amazon, B & N, iBooks, and on Kobo.

You can find out more about author Lynn Raye Harris and her books on her Website. You can also connect with her on Facebook, Twitter, and on Goodreads.

Disclaimer: I received an ARC of this book for free from Netgalley for my review. The opinions in this post are 100% of my own and may differ from others.
Posted by Unknown at 1:54 PM