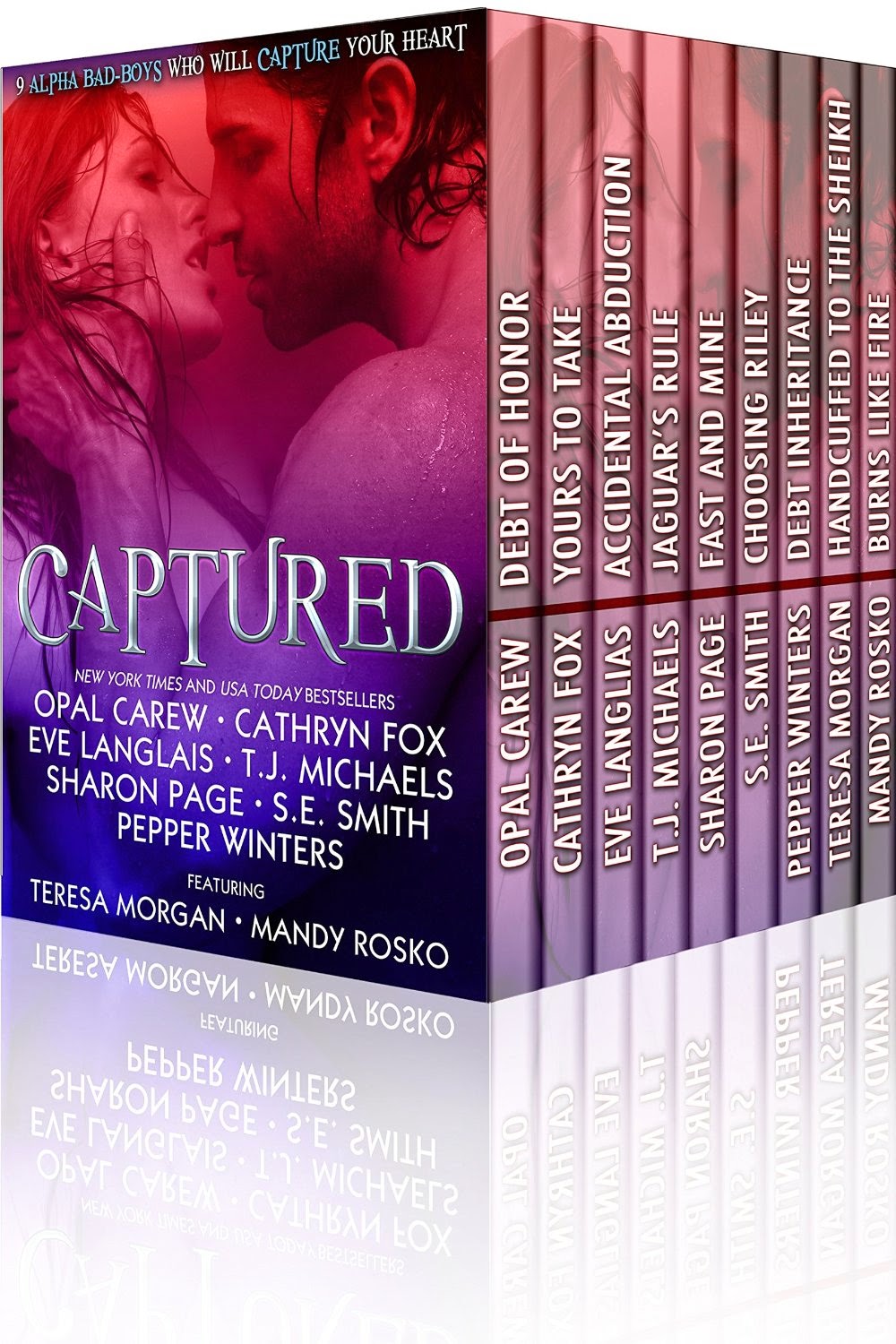 
NEW YORK TIMES AND USA TODAY BESTSELLING AUTHORS
CAPTURED is a steamy collection from today's hottest authors featuring 9 sexy bad boys trying to capture your heart, every way they know how. New York Times and USA Today bestselling authors Opal Carew, Cathryn Fox, Eve Langlais, T. J. Michaels, Sharon Page, S.E. Smith, and Pepper Winters, along with Teresa Morgan and Mandy Rosko bring you nine tales of sensual seduction featuring alpha male heroes determined to have their way, and willing to do anything to get it, even if that means a little seductive persuasion...


We've included a real mix of stories, from light & funny to dark & sinister, contemporary to paranormal.

DEBT OF HONOR by Opal Carew

Held captive by a domineering sheikh... and made to pay for a crime she did not commit


YOURS TO TAKE by Cathryn Fox

Revenge takes on a sexy twist when a powerhouse lawyer is stripped of her control by the handsome multi-millionaire she once took down in the courtroom.

Fall in love? Never! An alien assassin turned pirate has no use for an emotion he can't sell, but that doesn't stop him from falling for the human he captures.

After an irresistible night of passion with Reya, Aaron James longs to hold her close forever. Little does he know that the tall, sleek beauty has a carnal secret--and he's the one who needs protection.


HANDCUFFED TO THE SHEIKH by Teresa Morgan
The last thing Maxine Foss ever expected was to be handcuffed to a sexy, but crazy, guy who claims he's an Arabian prince... and is determined to seduce her. Best. Abduction. Ever.


FAST AND MINE by Sharon Page

College student Claire gets lessons in seduction from sexy, hot street bike racer, Sawyer. But when she's kidnapped by his psychotic sponsor to force him to race, can Sawyer save her and win her heart?


BURNS LIKE FIRE by Mandy Rosko
Jack Marilla is out for revenge for the deaths of his family, and the burn scars that cover his body. To get it, he has to hunt down the woman he used to love, the paranormal fire starter who set his house ablaze with him, and his family, locked inside of it. When he catches her, however, he faces his biggest challenge yet. To not believe her when she claims to be innocent, or fall for her seduction..

Jethro Hawk receives Nila as an inheritance present on his twenty-ninth birthday. Her life is his until she's paid off a debt that's centuries old. He can do what he likes with her--nothing is out of bounds--she has to obey. There are no rules. Only payments..


CHOOSING RILEY by S. E. Smith
Things take a turn for the worse when Riley St. Claire is kidnapped by aliens and forced to choose a mate. The problem is, it would have been better, and safer, for the aliens if they had left Riley back on Earth.

I was asked by the wonderful Cathryn Fox to do a review of this boxed set and I more than happily agreed to do it. Not only do I love Cathryn's books, but I was also looking to see if I found any new author's that I may enjoy. So normally I would do a whole long review on each book in this set. But I don't want to bore you and I'm actually on a library computer so I have a limited time to write this review.

Yours To Take:
As I said I was asked by the wonderful Cathryn Fox to review this set, especially for her book. This was a enjoyable fast and quick read. I almost wish that this story was a little bit longer than it was. I really enjoyed Rebecca and Quinn's character's. If someone were to kidnap me for a  weekend I would definitely want it to be Quinn. I wouldn't mind him teaching me a few thing's. It was steamy and hot and everything delicious. Like I said it was a fun and quick read.

Debt Of Honor:
This book was the 1st story in the set and the 1st story I read. And it was one of those books that I normally don't read much of and when I first started to read it I was like "uhhhh." I found myself not wanting to read it but at the same time I couldn't stop reading it. In the end though I really did enjoy it and found that I enjoyed the character's in this book. I will warn you though there is some female on female action in this story. So if you don't enjoy reading that you might not enjoy this story.

Handcuffed to the Sheikh:
After reading Debt of Honor, I decided to go ahead and read Handcuffed to the Sheikh. This was another fast and quick story. It was steamy and hot and so much more. I loved the character's Maxine and Sayd. This story made me laugh a little bit and it made me really feel for Maxine (who can't remember she's married to Sayd) and for Sayd because he loves Maxine and just wants her to remember their love. It's another one of the stories in this set that I wish just a little bit longer than it actually was.

Overall I would give this boxed set a 4.5 out of 5 Stars. It was thoroughly enjoyable and I liked all of the books in them. I would recommend this boxed set to anyone who loves any kind of story that has a little bit of everything in it.

Disclaimer: I received an ARC of this boxed set from Cathryn Fox for my honest review. The opinions in this post are 100% of my own and may differ from others.
Posted by Unknown at 1:40 PM