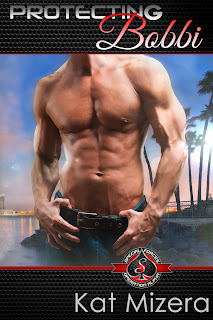 Book Description:
After the unexpected death of his sister, Ron Marshall is wholly unprepared to take custody of his two-year-old niece. Between his classified position as a member of the U.S. Marine Corps Force Recon unit and his role as a single father, he hasn’t thought about women or sex in the six months since he got custody. However, his niece’s new pre-school teacher breaks down all of his defenses, especially since they have a history.
Single mom Bobbi Granger has struggled since the death of her husband, but when her high school crush walks in with his niece, things may be changing for the better. She’s not particularly thrilled about dating another Marine—especially one who goes deep undercover at a moment’s notice—but she can't deny the pull she feels for him.
When Ron is called away for an unexpectedly long mission and trouble finds Bobbi, will he get back in time to help or will he lose his second chance with the woman he’s been thinking about since high school?

I loved Ron, aka Ronnie, he was sweet, kind, caring, protective. I loved that even though he was a single man and a military man at that, that he took on his sister's daughter after she passed away. He was an all around awesome guy.

I really liked Bobbi. She's a single mother who is widowed and just trying to make it with her son. She was a bit on the shy side. But sweet, kind and caring. You could tell that her deceased husband kind of knocked her confidence down a bit. But she was definitely still a strong person.

This short story was really a second chance romance between Ron and Bobbi. They had known each other from high school and are finally reunited. I just loved Ron and Bobbi together, I thought that they were meant to be. I will say this though Bobbi loved to call Ron, Ronnie and their names were so close to sounding the same that at times it bugged me. I know a trivial thing to be picky about. Even though this was a novella there was no shortage of smexiness and even packed in the drama. I found myself immersed in this story and wishing it was longer and wanting to get to know the secondary characters better also.