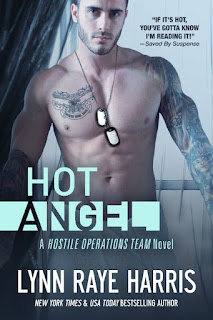 Brooke Sullivan's carefully ordered existence is spiraling out of control. Two years ago, she was violently abducted by a terrorist group and nearly killed. She's worked hard to get her life back on track--moving to a new house, changing careers, going on a couple of dates.

When she witnesses a murder, she's plunged into a new nightmare. And as the past threatens to repeat itself, she's not sure she'll survive this time.

Cade "Saint" Rodgers never forgot the beautiful girl he talked to at the wedding of his commanding officer. Now she's in trouble, and he's the one tasked with protecting her. Brooke is terrified of men like him--a Black Ops soldier for whom violence is a way of life--which makes falling for her a terrible idea.

But that won't stop Cade from using every sensual trick he's got to make her believe anything is possible if only she wants it badly enough.

As danger draws closer, it'll take all of Cade's strength--and all of Brooke's determination--to learn how to let go of the past and trust each other.

But it might not be enough. To keep her safe, he may have to let her go forever...

The Hostile Operations Team is a covert military Black Ops unit. Their motto is Where None Dare. H.O.T. operators come from all branches of the military. The only criteria for membership: they must be the best of the best!

I have to say as much I really love the other books in this series. I think this may be my new favorite one. I really enjoyed the characters in this book and thought they were very likable.

I loved both Cade and Brooke in this book. As just mentioned above I thought they were both very likable. And I really liked them together.

I thought Brooke was awesome in this book. She's Grace's best friend and was the one who had been abducted. And even though with she went through kind of made her timid around people. I thought that made her stronger in a way.

And man Cade.... What can I say about Cade? Except for where can I find one of him!!!