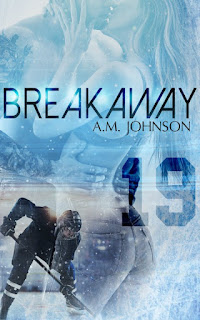 As Tampa Bay's star center, Mark Carmelo's life was hockey, and after a bitter and public break up, all he wanted to do was focus on the game.
Until he saw her.
The one that got away.
The one he thought he'd never see again.

For thirteen years, Stevie West drowned in her lackluster life. Recently divorced from her “roommate” with passionless benefits, she was ready to start over. On her own.
Until she ran into him.
The same man she'd met one year ago.
The temptation that had finally given her the courage to find herself again.

When lightning strikes twice, there’s no way to deny the chemistry it creates.
But with both of them still nursing old wounds, Mark and Stevie will have to find a way around the other's defenses, a way to breakaway and score the one thing they never expected… love.

Again my review for this book is a few days late. But I literally just finished last night and finally got my new computer today. So I can finally write out my review. Anyways this is the first book I have read by Mrs. Johnson and I was really looking forward to it since it was a hockey romance.

Look I liked Mark, I really did. Though he was a bit younger, he had a pretty straight head on his shoulders. He seemed to know exactly what he wanted in life. And even though he had a bad break up he didn't seem to let that bug him much. I do have to say that I loved the love that he had for his autistic niece and his sister. I just thought all around he was a very likable character.

I also liked Stevie. I thought she was sweet and kind. I also thought that she was likable. Her being a few years older than Mark, she was kind of set in her ways. I will say this though even though she was likable, I found myself not connecting with her character.

As I said at the start of this review this is the first book I have read by Mrs. Johnson. And I had been excited about it since it was a hockey romance. But I'm kind of picky when it comes to my hockey romance books and found this one really had very little hockey in it. And even though I found both Stevie and Mark's characters likable. I found myself wanting to know more about Mark's best friend and the captain of his team Bryson.

Disclaimer: I received an ARC of this book from Give Me Books Promotions for my honest review. The opinions in this post are 100% of Busy Bumble Bee Book Reviews and may differ from others.