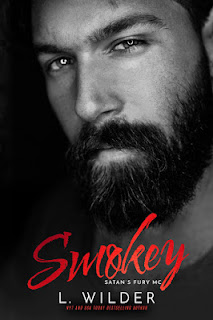 You can’t fight fate, especially when it brings you a girl like MJ Thompson. She wasn’t just beautiful. No, she was so much more than that. She was smart with a smile full of magic and curves that drove me to distraction. I wanted her, but there was a catch: She was the lawyer handling my father’s will. And as if that wasn’t enough, her dad was a cop.

I should’ve known better than to get mixed up with a girl like her, but I just couldn’t resist. I wanted to feel her body pressed against mine. I wanted to hear her call my name while she was wrapped in my arms, so I ignored my instincts. I made her mine. After one night, she had me, heart and soul. Every ounce of doubt, every second thought, vanished.

Life was good. I had my woman by my side. The club’s new pipeline was moving forward, and I was coming to terms with my past. Then, without warning, it all fell apart. I lost her. She skipped town, leaving only a note and a lot of unanswered questions. I thought I had to let her go, but she had a secret. After discovering what she was hiding, there was nothing I wouldn’t do to have her back in my arms.

Sometimes the road takes you on an unexpected turn, and you end up exactly where you’re meant to be.

I'm going to start this review out a little differently from my other reviews. I want to first say that I really liked Smokey and MJ's character's. Now did I necessarily like their character's together? I'm still uncertain about that at this time. Second I want to say that I did love that Smokey and MJ seemed to have such easy banter between them that was really likable. I also like that on some levels that they really did connect to each other.

I loved Smokey right off the bat. He seem's to be one of the more laid back, easy going of the Satan Fury brother's. He was very likable, sweet, kind, caring, and even a bit funny. Though when it came down to his brother's and club he became serious.

I have to say I kinda have mixed feelings about MJ. I will say the first half of the book I really liked her. The second half she seemed like a completely different person. Though I did understand where she was coming from wanting to protect Smokey and the club. There were a couple other things that made me go, eh.....

I have to say though even if I had mixed feelings on MJ. I really did enjoy this book. And did enjoy Smokey and MJ.

Disclaimer: I received an ARC of this books from Enticing Journey Book Promotions for my honest review. The opinions in this post are 100% of Busy Bumble Bee Book Reviews and may differ from others.


Posted by Busy Bumble Bee Book Reviews at 9:41 AM