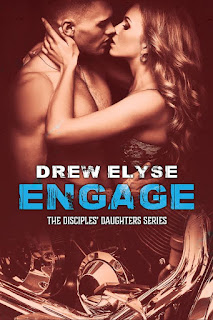 Once a Disciple, forever a Disciple.They came for her in the night.When she wakes, she’s in a cell.She has no idea if it will help, but it is the only option she has:She tells them she belongs to the Savage Disciples MC.A Disciple will fight like a savage when it counts.Years ago, he lost everything.Now, the club is the only thing Jager allows himself to care about.Nothing matters but his Savage Disciple brothers.At least, until she arrives and he has a decision to make.This biker has no idea what choosing to engage could mean to a Disciple's daughter.

I have become addicted to this series. Every time I read a book in this series I just need more, more, more. And they can't seem to come fast enough. Now that being said as soon as I finished the last book I couldn't wait to read Jager's book. Of course Sketch will always be my favorite, but there was something about Jager that just drew me to him.

I loved Ember. So Ember is the daughter of Roadrunner and we really don't know much about her. I honestly even forgot that Roadrunner had a daughter, because of course she hadn't appeared in the other books. But Ember's mother took her away from Roadrunner and the club life, after her parents had split when she was younger. Now after a night where there is a break in her apartment and she is taken Ember does the only thing she can think of and relies on the fact that she is a disciples daughter to save her. I love how strong of a character Ember is, and even though she didn't grow up in or around the club life, she fits right in and doesn't seem to resent to much of what she has missed.

I just loved Jager. He's kind of a lost and tortured soul. After not being able to save his family in a house fire when he was younger. I think he misplaces a lot of the blame on his shoulder's. I loved the relationship between him and Ember. And I loved watching it grow.

As I said above I have become addicted to this series. Though I have say no one will ever take the place of Sketch in my mind, but Jager comes in a close second. I read this book in one full swoop and way too fast, I just couldn't put it down.

Disclaimer: I received an ARC of this book from Ardent Prose PR for my honest review. The opinions in this post are 100% of Busy Bumble Bee Book Reviews and may differ from others.

Posted by Busy Bumble Bee Book Reviews at 9:22 AM