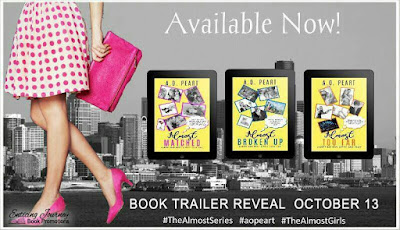 Would you take another shot at love? Or just settle on a friend with benefits?
Their heartbreaking past will move you. Their passion will make you blush. Their antics will make you laugh out loud.
Twenty-five-year-old Natalie Davenport lugs substantial baggage. One boyfriend after the next has been a total disaster, leaving Natalie distrustful toward the male population in general. So when Colin Hampton crosses her path, she’s cautious. Her heart (and some other body parts!) nudges her to go for it, while her head wants her to run for the hills.


Colin is one of those gorgeous guys who attract women, no matter the age or marital status. With a successful career at a popular Seattle radio station, hard body, and charming personality, he is the complete package. But something dark lurks in the corners of his soul; some murky experience that has changed him—maybe for the better, but maybe for the worse.


Will he steal her heart and stomp over it like other guys did?
Will she let him into her heavily fortified world despite herself?
Or will they settle somewhere in the middle—establishing the emotional boundaries to protect them from falling in love? 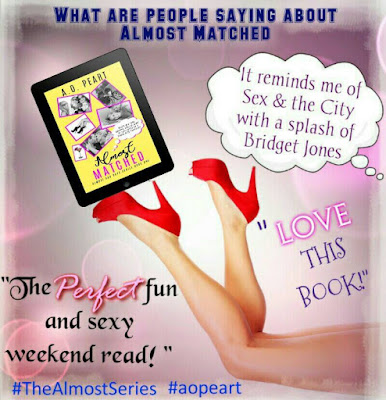 "A.O.Peart delivers passion, single lady laughs and romance all in one with Almost Matched. If you are looking for a fun, laugh out loud contemporary read then this is the book for you!" ~ Bestselling author Cambria Hebert

How far would you go to protect the one you love?
The terrors of Colin’s past are revealed and accepted by Natalie. Her doubts about letting him into her life are finally disbanded and replaced by a sense of security and commitment. But Natalie doesn’t know that Colin’s past hides more dark secrets unknown even to him.
When a delusional psychopath threatens Colin’s life, things quickly become complicated. Natalie’s stubborn character and desire to kick ass won’t let her step aside and allow the authorities to handle the danger. She gets herself tangled up with street hoodlums, befriends a Russian mobster’s high-maintenance girlfriend, and becomes expert at picking locks and hiding evidence. 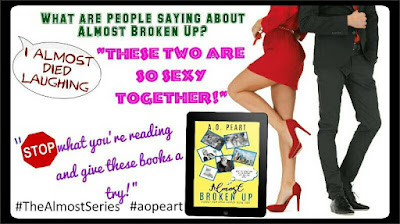 "I almost died laughing. These girlfriends really tie the story together and Colin is a dream boyfriend. Another awesome story in this series. A definite read, especially when you love romantic entanglements, meddling best friends who always have your back, crazy guys in leather, and the Russian Mafia."~ Pixxie Styxx

"This book contains some really hot sex scenes!!!(Fans Face!!!). (...) I read this in one sitting and I could not put it down!! I just love these characters and can't wait for the next book to find out where life has taken them. Another 5 star read for me!! Way to go A.O.Peart."~ Britt23

A martini glass of sizzling romance, a jigger of suspense and crime, perfectly shaken with a twist of wacky humor.
Where would you draw the line between love and trust?


When Colin’s feisty great grandma Helga mysteriously disappears, Natalie and the gun-toting Svetlana rush to the rescue. With the help of Russian mafia goons and Natalie’s girlfriends, they get more than they bargained for. Natalie invites trouble into her life all over again. She could find herself questioned by the police, or worse, her relationship with Colin could become rickety once more.


And so the race begins: with grandma Helga on the loose, Colin turns to the police for help, and Natalie is a stiletto heel tip outside of the law. But being in the wrong has never felt so vindicated. 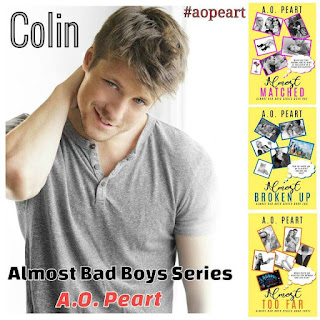 “OMG this book has it all! Twist, turns, ups, downs and all arounds.” ~ Jackie’s Book Reviews

“Almost Too Far was a great ending to the Almost Bad Boys series. If you're a reader who enjoy a lot of friendly mischief and sexy moments, I would definitely recommend this romance series.”~ A Novel Glimpse 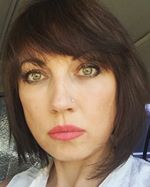 A.O. Peart left beautiful but rainy Seattle for sunny but hot Arizona in summer 2015. She writes in several genres including romantic comedy, romantic suspense, dark contemporary, and paranormal.
Angela lives with her family and a chronically curious cat Cinnamon who behaves like a dog.  You can often spot her in one of the Starbucks locations, feverishly typing on her computer and sipping coffee with cream--or rather, cream with some coffee in it. Don't be surprised when a paperback you ordered from her arrives "decorated" with coffee and chocolate stains (kidding!)

**Warning: contains explicit sex scenes, profanity, and high dose of both sarcasm and wacky behavior of the female characters. This is a tongue-in-cheek comedy with dark twist.


If you're a prude or a killjoy with no sense of humor, DO NOT BUY THIS BOOK, or do so at your own risk. May not be appropriate for readers under 18 years old. **You have been warned**