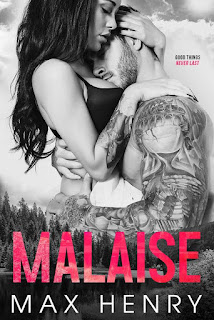 Final exams and end of year parties don’t seem so important at your brother’s funeral. Two short weeks, and Meg would have survived her senior year relatively unscathed. But when her best and only friend—her brother—dies in a questionable road accident, being the loner in her year doesn’t fit as well as it used to.

One act of kindness from the man her small town isolated amidst rumors and lies, and her hope for a day where pain won’t overwhelm her doesn’t seem so far-fetched. Brett Carver is trouble with a capital T, but he’s also the only person who can get Meg to let go and smile. Some good things are never meant to last.

Arrested for a crime he didn’t commit, the man who finally found a way to bring light back to her dark days is ripped away when she needs him most. Determined not to lose the only good thing to have come out of her year from hell, Meg sets out to prove Brett isn’t guilty.

But first, she must accept the ugly truth … … that the people who can prove his innocence are the same people who will do all it takes to keep them apart.

First off I have to say Hat's Off to Mrs. Henry for writing something that's completely different than from what she usually writes. Although this book is still kind of dark in its own right, its not like the dark in her Butcher Boy's series or Fallen Aces' series. But there are still dark undertones to this book.

I fell in love with Meg I really did. I felt her pain and anger. I felt for her and everything she went through. Meg loses her big brother Den in an accident and than basically outcasted by her parents. Man I just wanted to smack some sense into her parents. But I'm glad she found Brett and his sister Tanya. I thought she was sweet, caring, independent, and strong.

I loved Brett Carver, or better yet just Carver (as Meg calls him). He's the outcast of the town, the one everyone in the town calls the trouble maker. And I just think he was misunderstood by all, just because of who his family is.