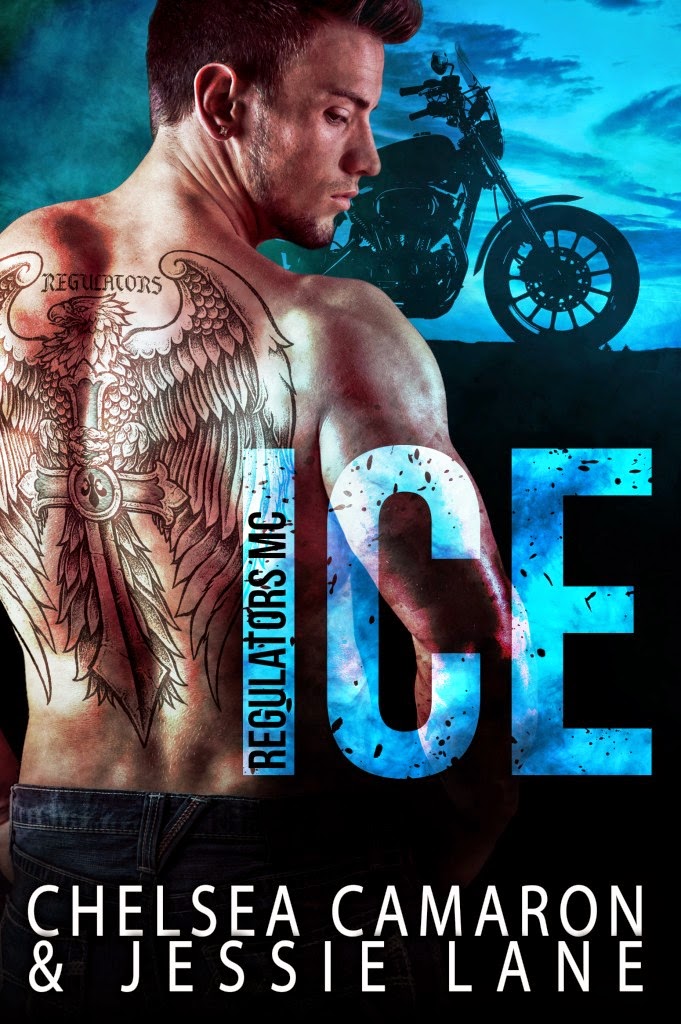 She's an investment banker.
He's an outlaw biker.
A little bit of heaven is about to meet a whole lot of hell.

Morgan Powell was raised to be perfect, to set an example for her sisters to follow. Her life has been dedicated to making something of her career, so she wouldn’t know what to do with a man even if you gave her an instruction manual.

Brett 'Ice' Grady spends his days trying to keep up with his teenage daughter, his nights consumed in Regulators’ MC business. He has no time for anything more than a casual hookup.

Two worlds collide when the dangers of his life crash into the calm of hers.

Can she go beyond her own boundaries and chip her way through to the man known to be as cold as ice?

So two authors that I really, really enjoy reading have teamed up together to start a new series. A new motorcycle club series, which I'm really happy about since I have been on a MC kick lately. The first book starts with, obviously as the title states, Brett 'Ice' Grady. If you've read Jessie Lane's Stripping Her Denfenses than you probably know that's where we first meet Brett 'Ice' Grady. If you haven't read Stripping Her Denfenses you can read my full review  HERE.
I really enjoyed 'Ice' in Stripping Her Denfenses. You could tell that he really liked and cared about Kara. And what he would do for someone he cared about. I'm saying all this because 'Ice' may have seemed like an arsehole to most when you meet him in Stripping Her Defenses.
I have to say I really enjoyed this book from beginning to end. You really get to see how Brett 'Ice' Grady is and what makes him tick. You also get to know his back story. Even though he proclaims himself a prick. I don't see him that way at all. I a man who is a business man, a club leader and a father. Also I see someone who lost someone he cared for very deeply. You could even see how much he cares about his daughter. He even had me giggling at times.
Morgan is a very likable character. She's independent and strong and has made something of herself. She's also very dependable, which might be a hinderance for her. You can tell she care very deeply for her sisters. Proof of that being she seems to be the only one who cares her sister has gone missing. Well besides Brett's daughter and Brett.
I will say that in this book, unlike in other books. Brett and Morgan's relationship is very slow moving, no not moving maybe I should say, slow progressing. It's not bam in your face like a lot of books. It was refreshing to read a slow progressing relationship. The downfall of this book is that most of the book Brett and Morgan don't have a lot of interaction with each other. Especially with the rocky start they get in this book and than with Brett looking for Morgan's sister.

But besides that I did really enjoy this book and would give it 4 Out of 5 Stars. And I can't wait to read Hammer's book next.
You can purchase ICE {Regulators MC 1} on ~

Disclaimer: I received an ARC of this book from Love Between the Sheets for my honest review. The opinions in this post are 100% of my own and may differ from others.

Posted by Busy Bumble Bee Book Reviews at 11:51 AM