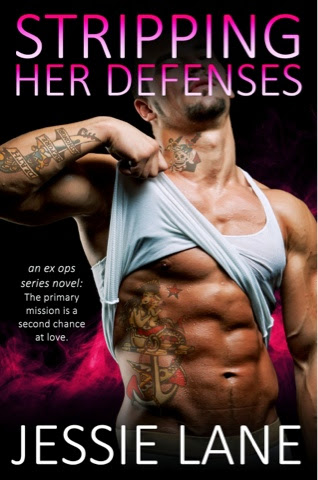 He can’t change the scars on her body…
but fate will give him a second chance to mend the scars he put on her heart.

Riley Sullivan and the Ex Ops Team are headed to Miami undercover… as bikers. Following up a lead, the men will perform their investigation acting as members of the Regulators Motorcycle Club with the club’s permission. Surrounded by hardcore bikers and investigating missing strippers, Riley finds the last person he ever expected to see again—his ex-wife.

Kara Sullivan left the man she loved after a tragic accident cost them their unborn son. After years of therapy, she’s come to grips with the loss and has re-emerged from the pain a brand new person. That doesn’t mean she’s ready to face the man who inadvertently broke her heart, and who she’s hurt in return.

Riley has never stopped loving her and he never will. He’s ready to fix their marriage and move on with their lives, however Kara’s reluctance to renew their relationship isn’t their only problem. Danger lurks just around the corner… and there’s a chance she could disappear permanently.

I was given an ARC of this book and I was super excited to read this series. It's a new series for me to read and a new author. In fact I was given this book and the 1st book Secret Maneuvers to read. I will be putting up my review for that book later today. You should probably read the books in order so you can understand the characters and understand the book.  This book picks up right where Secret Maneuvers leaves off.

Even though Riley's very quite in Secret Manuevers I couldn't help but really like his character. It's obvious that he has demons on his shoulders that he can't shake. And you can't help but feel for him and want the best for him.

I really don't want to give away any spoilers in this review. So this ones a little harder for me to write one on.

Even though you don't meet Kara until this book. Right away you can tell she has become a different person from the one she was with Riley. You can tell she's independent and has grown as a person. Which really is in the best interest for herself personally and for Riley. It's obvious that Kara has learned a lot about herself since she's been apart from Riley.

This book was so beautifully written and is so emotional and touching. Author Jessie Lane deals with several touchy topics in this book. But deals with them tastefully.

You can purchase Stripping Her Defenses (Ex Ops, #2)

You can also connect with author Jessie Lane

Amazon Author Page: http://www.amazon.com/Jessie-Lane/e/B00CN02LZM/ref=ntt_athr_dp_pel_1
Disclaimer: I received an ARC of this book from Love Between the Sheets for my honest review. The opinions in this post are 100% of my own and may differ from others.
Posted by Unknown at 9:08 AM