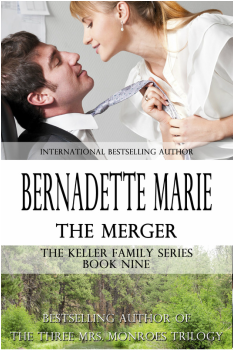 Business minded Spencer Benson only sees the bottom line getting bigger when he begins merger talks with another family owned company. However, headstrong lawyer, Julie Jacobson, is determined to be very thorough with the merger, which throws Spencer off his game.


Spencer makes no qualms of his dislike for Julie, but when she comes to him for help he finds perhaps she's not quite the menace he thought she was. In fact, his feelings for her change completely. But when he finds that someone has used the merger to stab him in the back whom can he turn to when Julie’s name is associated with the deceit?

Do you enjoy reading series? Well if you do, than you'll be happy to know that the Benson-Keller family are back. I was lucky enough to be able to get an ARC of  The Merger by Bernadette Marie. The Merger follows Spencer the son of Regan and Zachary, from The Excutives Decision. Bernadette had me chuckling right from the start of the story, chucking in a good way that is.

Julie, Julie, Julie.... Poor Julie. She a just kind of been handed a bad deal in life. Her parents aren't around anymore, her ex-husband is an arse, and she just lost her job. But all in all she's confident in who she is and what she does.

As I said at the start Bernadette had me chuckling with the way Spencer and Julie started out. But you could tell there was some sexual tension between them. I loved that even though this is book nine in this series, I'm not tired of the Benson-Keller family. Bernadette kept the plot flowing smoothly throughout the entire story. I also love that other members of Benson-Keller family are included in this story.

I would give this story 4 Stars Out of 5 and would recommend this book. If you love sweet romances you'll definitely enjoy this book.

You can Pre-Order The Merger on Amazon, B & N, Kobo and on iBooks

You can find out more about author Bernadette Marie and her books on her Website . You can also connect with her on Facebook and on Twitter.

Disclaimer: I received an ARC of this book from Bernadette Marie for my honest review. The opinions in this post are 100% of my own and may differ from other's.