18+ for language and sexual situations...

Fresh out of jail, Dead Presidents MC Sergeant at Arms, Marcus “Havoc” Wilson, is trying to lay low and keep his PTSD-induced temper under control while helping other military veterans rejoin society. In search of relaxation techniques, Havoc stumbles upon an alluring bookstore owner with a violent past of her own who’s able to calm him down in ways he’s never experienced.

Julia Edwards gave up her life of privilege the minute she tried to kill her ex-husband, and she doesn’t want it—or him—back. As a small Seattle bookstore owner, she’s determined to spend her days hidden between the covers of romance novels until her real-life fantasy appears and shakes up her entire existence.

Can these two attempted murderers find peace together? Or will the loose ends from their past unravel their future?

About a half hour, three chapters, and two cups of coffee later, the bell above the front door chimed. Pleasantly surprised, I set my book down and looked up, preparing to greet my first customer of the day. At the sight of who had come in, the greeting froze on my lips. Standing close to six-and-a-half feet tall and wearing the same inviting smirk that seemed to grace all his pictures, Marcus “Havoc” Wilson filled the doorway. And I mean, he filled the doorway. Everything about him was big, muscular, and imposing, blocking out the sunlight and dampening the sounds of the city.

After the hours I’d spent scanning the web for juicy details on the Kinlan scandal, I’d recognize him anywhere. I just never expected to see him in person. Wearing faded blue jeans, dirty work boots, and a leather biker vest over a tight black T-shirt, he was one hundred percent, grade A, pure male, exuding sex and power like rays of sunshine penetrating my cold, dead love life. His testosterone levels had to be off the charts. I was tempted to close my eyes and bask in his manliness, but instead drank in his appearance once again, pausing to appreciate how large his hands and feet were.
No doubt this man was huge everywhere. The thought stirred something to life inside me and heated up my entire store.


“Mornin’,” he said, closing the door behind him. Such a deep, sexy voice. Deep and sexy enough to send vibrations straight to my lady parts. If that sound was coming through a speaker, I’d be tempted to sit on said speaker and work some stuff out.
I needed to get a grip.
Actually, I needed to get laid. And to stop reading romance novels. And to stop drinking. What if he wasn’t real, but just some figment of my imagination spawned from loneliness, desperation, and booze?
“You’re open, right?” he asked.


He sure sounded real
“The sign says you’re open. I can come back later if you’re not.” He reached for the doorknob.


The idea of him leaving spurred me to action, freeing me from whatever spell his unexpected presence put me under. I stepped forward, ready to tackle him if he tried to escape. “Sorry. Yes. I’m open.”
He cocked an eyebrow.


Unintentional sexual innuendo for the win. Heat flooded my cheeks. “The store’s open, I mean. You’re… you’re Marcus Wilson, aren’t you?”
His eyebrow dropped, and his expression darkened. “Havoc. Please. Do I know you?”
“Did Laura put you up to this?” Had my sister really contacted him and sent him my direction? I’d kill her. Or I’d hug her. I was so confused I didn’t know what I’d do.


“Laura?” He tilted his head to the side staring at me like I was a puzzle. Either he was an excellent actor, or he had no clue who I was talking about. Carefully watching me, he shook his head. “Sorry. I don’t know any Laura. I’m just here looking for a book.”
Could it be true? Had the universe brought him to my doorstep out of mere coincidence? If so, I’d just made a complete fool of myself. “Right. A book. I can help you with that.” Scooting down the counter to my computer, I pretended we hadn’t just shared an award-winning awkward moment and got down to business. “Do you know the title, author, or genre?”
He stared at me, no doubt trying to determine my level of sanity and possibly marveling at my recovery skills before answering, “Something about keeping flowers alive.”
Come on. This had to be some sort of setup. No way was a man like Havoc searching for a book about flowers. I wanted to laugh and tell him I was on to his and Laura’s little game, but his expression remained serious, making me second guess myself. Fingers hovering over my keyboard, I considered the circumstances that would send him after a book about flowers. Maybe it was a gift? For whom? He wasn’t wearing a wedding ring, so I decided to fish.


“Who’s the gardener?” I asked. “You or your significant other?” It was a blatant, shameless line, but I’d cast it, and there was no reeling it in now. At least not until I saw whether or not he’d bite.
He watched me, his expression curious and a little amused. “No significant other. Just me.” 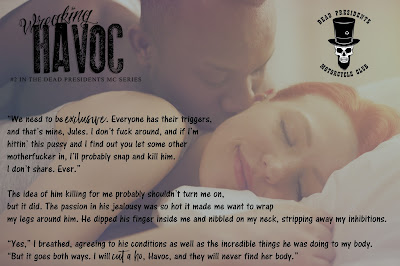 Posted by Busy Bumble Bee Book Reviews at 7:44 AM