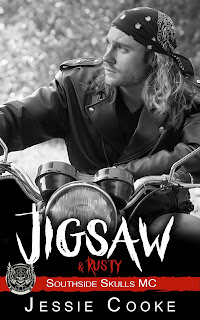 Two Books in One: Jigsaw and Rusty
Jigsaw:
When you’re fighting for your life, with your Harley lying on your broken body, on an embankment twenty feet below the road, there is no time to think… “What the hell happened” and “Who was responsible?”
Someone, somewhere, must hold the missing pieces of the puzzle.
Jigsaw had one thing on his mind… survival, until he looked up into the eyes of an angel, minutes before another woman aimed a shotgun at his head.
He was alive at least… what else could go wrong?
Rusty:
When Rusty Daniels dumped his Harley in front of a group of boys who thought he was a hero, the former football superstar couldn’t walk away from them.
They gave him no option.
It was their way, or trouble would soon be headed his way… in a BIG way.
Reluctantly he headed in a new direction in his life… a direction that would lead him to a dying man called Saint, who would teach him more about living than he could have ever hoped for.
This is the 10th book in the Southside Skulls MC Series. It is a Standalone Romance Novel but characters from the previous novels, DAX, CODY, GUNNER, ZACK, LEVI, KAT, HUNTER, GARRETT & WHEELIE are included in this story too.
HEA and No cliffhanger.
Intended for Mature Readers.
* * *
The Southside Skulls MC Series is about members of the MC club, and their friends and associates.
Each story, while focused around one or more main characters, is not necessarily about a Southside Skulls club member, but the story is related to Skulls members and the club.

So I have to admit I was a bit surprised when I saw that this was actually two books in one, instead of just one story. But at the same time it made me a bit sad because that meant they would be short stories.

I will of course start with Jigsaws book, since the other book came as a surprise and I had just been expecting Jigsaw. I have to say that Jigsaw was an interesting start, since Jigsaw is a man that has no memory of who he is or where he came from. I thought Kimber was a good match for him, I thought she was sweet and kind.

I will say that Jigsaws book definitely kept your attention and had some twists in it I didn’t expect to come.

Now on to Rusty’s story. This story came as a surprise to me and I literally had no clue it was going to be included. I will say I believe that this is the first time we meet Rusty. I can’t remember if he made an appearance at the end of Garret’s book or not. But I think that this was really the first time we have meet him.

Rusty is a man who is on a dangerous slippery downhill slope. And he can’t seem to find a way out of it, until one day, some kids, and Saint make a difference in his life.

I want to say it was so nice to see a glimpse of Saint again in this short story. I fell in love with Saint in Garret’s book. So knowing what happened to him at the end of that book it was nice to be able to see him make such an impact on someone else’s life.

I throughly enjoyed both of these short stories. They were nice additions to this series. And even though they are short stories they didn’t lack the twists or the smexiness.