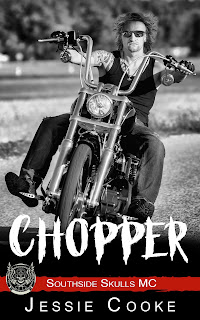 With the love of his life, Chopper was preparing for the road trip of his dreams, but nothing could prepare him for the journey he was about to take… NOTHING!

Chelsea had lost more than she could bear, and the last thing she needed was a wild biker from a motorcycle club.

He could mean losing the last chance she had in life, and that just wasn’t an option… so why was she saying yes when she needed a no?

This is the 11th book in the Southside Skulls MC Series. It is a Standalone Romance Novel but characters from the previous novels, DAX, CODY, GUNNER, ZACK, LEVI, KAT, HUNTER, GARRETT, WHEELIE, JIGSAW & RUSTY are included in this story too.
HEA and No cliffhanger.
Intended for Mature Readers.
* * *
The Southside Skulls MC Series is about members of the MC club, and their friends and associates.
Each story, while focused around one or more main characters, is not necessarily about a Southside Skulls club member, but the story is related to Skulls members and the club.

I have to say that even though this is the eleventh book in this series, I will probably never tire of them. Mrs. Cooke knows how to keep a reader interested in a series by not having them all in the same club or at least not at first.

I liked Chopper. I really did. Now I couldn't remember if we had ever meet Chopper before or not. His name didn't sound particularly familiar. I think it may have been mentioned in one other book. But anyways, Chopper is one of the Nomads for the Southside Skulls. His parents were a nomad couple so it's something he's familiar with. I thought all around Chopper was just a super sweet and nice guy.

Chelsea was well.... I'm not sure how to explain her.... I won't say that I disliked her, because I did like her in a way. She's definitely had some issues as she became older and has been fighting to stay away from her addiction. I will say I wasn't very pleased with her family.

This was a good book that brought the drama. It definitely didn't lack the action. And it kept me flipping pages.