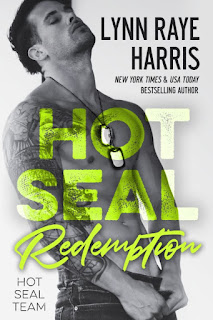 Bailey Jones doesn’t know jack about babies, but she knows how much it sucks to have a deadbeat father. So when her sister drops off her newborn baby and then disappears, Bailey is ready and willing to confront anyone, including a six-foot-two, sexier-than-sin Navy SEAL sniper, and make him do his duty.

Alexei “Camel” Kamarov is not the sort of man to carelessly father a kid, but as the oldest of six, he does know a thing or two about babies. The firebrand on his doorstep might have mistakenly tagged him as the baby daddy, but Bailey is cute, and Alexei is more than willing to give her a hands-on class in Baby 101.

When a ruthless criminal comes looking for the missing sister—putting Bailey and the baby in danger—the situation escalates. Bringing them under his roof and enlisting his HOT teammates to help find Bailey’s sister are easy. But as Alexei and Bailey draw closer, passions erupt and feelings tangle.

That’s nothing compared to the danger lurking in the shadows—and the test that awaits them both. Bailey will need to give everything she’s got to redeem Alexei’s faith in love. And he’ll have to move heaven and earth to save her—before someone takes her away from him for good…

I love Mrs. Harris's HOT series and I love when I get a chance to read them. I had really been looking forward to this book at the end of the last one.

Look I liked Bailey. I thought she handled the situation that her sister thruster on her the best way she knew. I thought she was fiercely protective and loved her sister and niece. You could tell she would and had done anything for them.

I mean I did like Alexei, aka Camel. But I think I expected a bit more from him. Now don't get me wrong he was sweet, caring, protective, and a very added plus he was great with babies. But I kinda feel like we got more from the other HOT guys. And Alexei was just kinda of eh...... Or maybe it was Bailey that was just kinda eh....

I wanted to love and enjoy every minute of this book. And as mentioned at the beginning of this review I had been super stoked about this book. But you know when you break up with someone and you give them the, "Its not you, it's me." speach? Now I'm not breaking up with Mrs. Harris's books. But I really feel like it was me in this instance. I think I'm in a book rut or something. But for me this book seemed to move a bit too slowly for me, I never really felt a connection between Bailey and Alexei. I mean I felt like they were more built for friendship than a relationship. And I did like both Bailey and Alexei. I also felt that by the time we got to the smexiness between them it was just kind of thrown in there.