Bought by the Badman {Book Review} 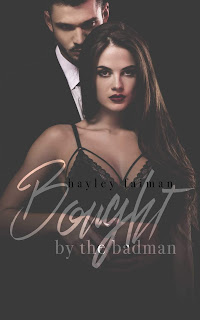 Giovanna Rossi was born an Italian Mafia princess, by blood only. Raised to be nothing more than a toy used to satisfy men’s pleasures. She was always available for a price. She never dreamed to hope for anything other than physical relationships.
Aidan O’Neil was once an Irish Prince, next in line to his father’s throne. He grew up to despise what his father stood for. After all, he helped bring the Irish king to his knees. His devotions now lie with the newly formed union between his Irish mob and the Russian Bratva.
An arrangement meant only to release physical tension, turns into so much more—it turns into everything. When a broken prince meets his match in a broken princess, their bond cannot be denied.
*Recommended for readers 18+ due to Language, Violence, and Sexual Content.

If you know me or if you follow my reviews frequently enough. Than you probably know that Mrs. Faiman is one of my favorite indie authors. Seriously I love all her Nortorious Devil's series and all of her Bratva Series. And speaking of which on her Bratva Series, I had been under the assumption going into this book that this one was the last of her Bratva men. which of course made me sad thinking about it all coming to an end.

I will say this book is not so much about my favorite Russian bratva men. As it is about my favorite Irish man. But don't worry the Russians do make an appearance in this book. Now I'm rambling on and probably giving to much away!!! Lol.... Anyways onto my review.

I think I will start with Aiden O'Neil, if you don't know who Aiden is I suggest going back and reading Devyn and  Timofei's book of you haven't yet. But if you happen not to go back and read the other book before going on to read this one. Aiden is Devyn's big brother, the oldest brother. He is also the man in charge of the Irish mob, from his father's death. He is also a man who was in a  loveless marriage for many many years. I really loved Aiden in this book,  I thought he was sweet, kind, caring. You could tell how much he loved his children. You could tell how much he loved and cared about his brothers and sister, and their families.

Alright let's get to Giovanna. She is the illegitimate daughter of the Italian head of the mob, Antonio Rossi. Her father decided instead of acknowledging he had an illegitimate child that she would become a working girl. And that's what Giovanna has done and is the best at what she does. I felt for Vanna and what her father made her do.

I really really enjoyed this book. And I really enjoyed Aiden and Giovanna. I think they are really close to being at the top of my favorite couples, though no one could ever take Kirill and Tatyana's spot as my favorites in this series. But Aiden and Giovanna come in a very close second. I loved the dynamics that Aiden had with his brothers in this book. And although the Russians aren't really in this book, as mentioned above they do make an appearance. Also as mentioned above this book was supposed to be the last in this series, but Mrs. Faiman is going to have one more!!!