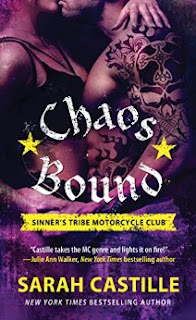 Love is a wild ride.
After enduring months of torture at the hands of the Black Jacks MC, and betrayed by his own club, Holt “T-Rex” Savage, a junior member of the Sinner’s Tribe Motorcycle Club, will stop at nothing to get revenge. But falling for a beautiful woman with dangerous ties to his sworn enemy was never part of the plan…
Raised by the Black Jacks, Naiya Kelly grew up fast, furiously, and with little to lose. But now that she’s put her MC days behind her, she is free to do what she wants—until she meets a man who imprisons her, body and soul. She swore she’d never give her heart to a biker, but Holt is the most passionate, protective man she’s ever known. But will Holt be forced to betray his one true love to exact his revenge?

So my review is way overdue.... But I'm finally trying to get caught up with reviews after dealing with some health issues..... Anyways this is one of the books on my most anticipated books of this year. After reading the last book in this series, I couldn't wait to read this book!!!!! So as soon as I got this book I started in on it right away. But my excitement died down quickly with this book.

I actually really liked Naiya at the beginning of this book. After being raised by the Black Jacks and getting away from them. She finds herself back in their grasps returning for her mother's funeral. I thought she was strong, friendly and encouring..... But somewhere along the way, probably around the middle of the book I started finding her to be a bit irritating. Her whole personality did a complete 180.

Man oh man, my opinion of Holt was the complete opposite of Naiya's. I had expected to love him right off the bat. But man I honestly couldn't stand him throughout the whole book. Look I felt for him and everything he had been through. I could even understand his need for revenge, since he felt like his MC brothers gave up on him. But man he just seemed so bitter throughout the whole book. And I felt like he didn't really listen when his MC brothers explained what happened. His whole attitude kind of just brought me down the whole book.

Look as I said at the beginning of this review I had been really excited about this book. But it ended just kind of being a big miss for me!!!!

Disclaimer: I received an arc of this book via Netgalley for my honest opinion. The opinions in this post are 100% of my own and may differ from others.