Disclaimer: I received an ARC of this book from the author for my review. The opinions in this post are 100% of my own and may differ from other's. 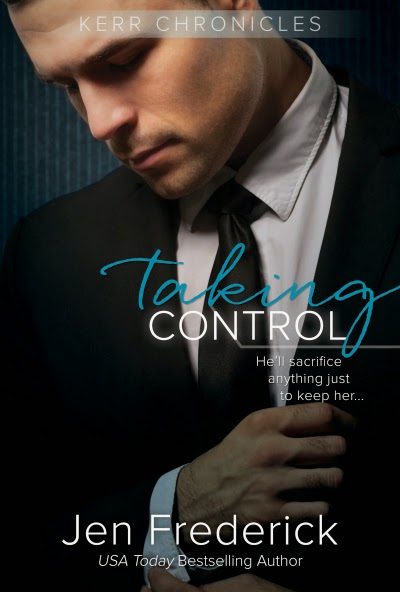 I thought I needed only one thing in my life--the money and power to crush one man. But the moment I laid eyes on Victoria Corielli, my thirst for revenge was replaced by my craving for her.

No rule would keep me away; no obstacle too large to overcome. Not her will, not our differing social positions, not my infamous past. When she lost everything, I helped her pick up the pieces. When she trusted me with everything, she sealed her fate.

I've convinced Victoria she can put her heart in my hands. Now I have to protect it--from her shady stepfather and my business rivals, from enemies known and hidden. I'll do anything to keep her. And I might have to prove it, because now Victoria''s risking more than her heart to be with me; she's risking her life.


Ian Kerr and Victoria "Tiny" Corielli are back in the second book Taking Control. I have been feeling very Ian deprived lately so, I got this book just in time to get my Ian fix. This is the second book of Jen Frederick's that I have read and if I hadn't become a fan reading Losing Control. Than I definitely became a fan reading Taking Control. If you haven't read Losing Control yet than you can check out my review for it HERE. I would definitely suggest that you read it first before trying to read Taking Control because you may be a little confused reading it. But I must say that Jen Frederick hit it out of the ball park with this book.

It was really refreshing to see this book written from Ian's POV, and than every now and than having Tiny's thrown in. It was nice being able to see the way that Ian thought and saw things. I feel like that in this book we got to learn more about Ian than we even did in the first book. We got to see a side of him that I don't think Ian lets many people see of him. And if I wasn't in love with Ian before, I'm definitely in love with him now. He's still his sweet, sexy, dominate and possessive self. But we also get to see more of the business side of him in this book.

Tiny's dealing with the death of her mother in this book. I still found Tiny to be likeable and her normal feisty self in this book. But I will say there were a couple of times I wanted to yell at Tiny in the book. I kind of felt that she became a little whiney in this book. I mean I know she was dealing with thing's. But still she was kind of complaining about that fact that she was no longer a bike currier and was stuck behind a desk now. I do have to say that by the end of the story though Tiny redeem herself.

I really liked that the plot of this story picks up from where Losing Control ends and that the story flows nicely. I also enjoyed that Jen brought back a few of the other character's from the first story. If you enjoyed the first book of this series than you won't be disappointed in this book.

I would definitely give this book 5 out of 5 stars and would recommend it to any of my friends.


I do not have any of the pre-order links yet but will post them as soon as I can.

You can find out more about author Jen Frederick  and her books on her Website. You can also connect with her on Facebook  and on Twitter.


Busy Bumble Bee Book Reviews  and Jen Frederick  are giving 1 lucky person the chance to win a signed copy of both Losing Control and Taking Control. This giveaway is running from 8/5/14 to 9/8/14. The winner will have 48 hrs to contact me to claim prize. Good Luck to all who enter!!!!


Entry-Form
Posted by Unknown at 4:57 PM