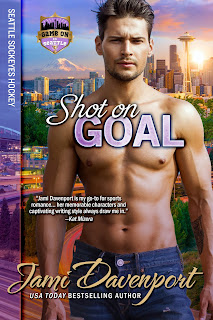 When you're at the top, there's nowhere to go but down.Two talented skaters. Two bright futures. Two shining stars. One ruined by a career-ending scandal and another by a father's ruthless ambition.Marina Sanders was the darling of the winter games, winning a bronze in figure skating one week after losing both parents in a car accident. Four years later, she was the most hated woman in America.Drew Delacorte was the future of the Sockeyes hockey team, crowned the best young player in the league and heir-apparent to the hockey throne once occupied by his father. Only Drew doesn't want that throne. Despite being in the prime of his career, he's considering hanging up his skates.Together they're fire and ice, and when things get that hot, they melt. Can these two broken souls find comfort and courage in each other's arms or will they find only pain and regret?

I love hockey romances.... Hockey romances are my gulity little reading pleasures.... I love when I find a great hockey romance.... So when I had the chance to read this book I got really excited. I hadn't read a book by Mrs. Davenport in awhile. But I have to say my excitment kind of died for this book. I have really mixed feelings on this book.

I want to say that I really loved both Marina and Drew's characters. But again like the rest of the book I have mixed feelings on them. I found them at times to be annoying, I'm not sure if its because they were younger characters or not. They were also a bit whiney throughout the book, "Oh poor me poor me."

I will admit that I did feel a bit more for Drew than I did Marina. Also Drew's parents drove me nuts.

I thought that although this book did drive me absolutely drive me nuts at times. That it was a good book. And others who really enjoy sports books will probably enjoy this book.