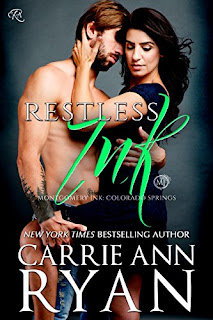 The Montgomery Ink series continues with the so-called sensible sister and the one man she never should have fallen for.For Thea Montgomery, baking isn’t only therapeutic, it’s also her dream job. She’s worked countless hours keeping her bakery afloat, and now that it’s where she wants it to be, she’s ready to expand and take the next step. When it comes to work and her family, she’s on top of her game. Her personal life, however, is a different story.When Dimitri Carr isn’t teaching and hiding his ink under long sleeves to keep the bosses happy, he’s trying to be the best brother and friend he can be. After his divorce, he’d thought he would lose Thea from his life forever because she’s his ex-wife’s best friend. But now that he’s free, and the two of them realize they want to keep their friendship. Then he finally sees what he’s been missing all this time.But there are more problems than the fact that Dimitri is Thea’s best friend’s ex. And when accidental touches and flirtations aren’t enough for either of them, and they’re finally ready to take the next step, they’ll find out exactly what that cost is for crossing that line. And will need to find the strength to face it.

I just love the Montgomery Family and have so since the beginning. And I don't think that's going to stop anytime soon. At least I hope it doesn't.... We are on book two of the Colorado Springs Montgomery family members. And we get to follow Thea and Dimitri this time!!!!

Thea and Dimitri are no strangers to each other. They are former best friends, although not sure you can call them former. But they were best friends, and than Dimitri married her other best friend Molly. But than their friendship kind of took a weird turn when Dimitri and Molly divorced. And now the two are reconnecting to each other in more ways than one. And oops I may have just gave away the whole book in this one paragraph, sorry!!!!

I did like Dimitri's character. I thought he was sweet, kind, gentle, and caring. I will admit though he did seem to be a bit of a pushover on some things. He seemed to strive to be a people pleaser, and maybe that tended to have people run over him thinking he was weak. But overall I thought he was a very enjoyable and likable character. Also loved the love and loyalty he had for his dog and family.

I think my feelings on Thea are the same that I had for Dimitri. I liked her, I thought she was a likable character. She's probably not the most rememberable of the Montgomery crew. But she was sweet, kind, caring, and again likable.

So first I want to say that I did enjoy this book!!! Second I want to say I think this book went a bit off kilter towards the end. I kind of thought that Mrs. Ryan was just throwing stuff in there, to throw stuff in. As mentioned above I thought both Dimitri and Thea were likable characters, but not exactly memorable. I almost liked the secondary character's in this book more. Like the Carr siblings (and if you don't know who they are, their Dimitri's siblings). And I found myself wanting more and more to know what was going on with Carter and Roxie, than I was wanting Dimitri and Thea. But other than that it was an enjoyable book.