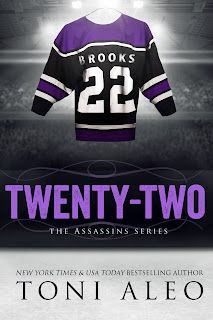 When Lucas Brooks was traded to the Nashville Assassins over a decade ago, he was a brash, brawling hothead without an anchor.Well, four kids and a smokin' hot wife will weigh you down real fast, but Lucas wouldn't change a minute of his happily ever after. During an epic, end-of-season quest for the Cup, changes appear on the horizon, and suddenly, there's a plot twist in Lucas's fairy tale.

Oh my poor heart...... I was not expecting the overwhelming emotions that came with reading this novella. Even before I got a chance to read it, I knew something BIG was going to happen, that things were going to change. I was just hoping it wasn't what I thought it was!!!!

I have said this several times throughout the last couple of years while writing my reviews for any of the Assassins books. I have been with this series since the very beginning. I have been with Fallon and Lucas since the very beginning when Mrs. Aleo had their story on a little site called Booksie. And at that time it was the only good hockey story on that site and back than I only hoped that the author would write another story on the site. I never imagined that I would follow and watch this series explode like it has.

As I just said I have been with Fallon and Lucas since the very beginning. I'm so happy that they have their happily ever after, after everything that they had been through. Of course I've loved seeing them make appearances in other books in this series. My heart broke for Lucas when was to decide whether he was going to continue with his career or retire. I loved how supportive Fallon was of Lucas. Their children cracked me up. And I've loved watching Aiden grow up in this series.

As I said at the beginning of this review I couldn't believe the overwhelming emotions I felt reading this story. Mrs. Aleo actually pulled some tears from me at the end, which is a feat in itself. Its hard to say goodbye to some of your favorite characters when you've been with them since the start. When your reading their book and they feel like real people, and feel like a real part of your family.

I can only hope before the end of this series that we will get a book with Aiden. And that hopefully we will still get glimpses of Fallon and Lucas!!!!