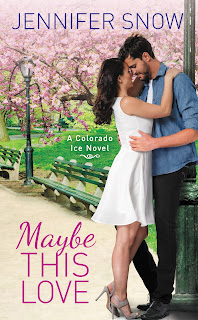 THE GAME OF HIS LIFE

Hockey player Ben Westmore has some serious skills---on and off the ice---and he's not above indulging in the many perks of NHL stardom. When a night in Vegas ends in disaster, he realizes two things: 1) it's time to lie low for a while, and 2) he needs a lawyer---fast. But the smoking-hot woman who walks into his office immediately tests all his good intentions.

Olivia Davis doesn't need anyone derailing her career---or her dreams of starting a family---least of all a skirt-chasing player like Ben. But soon he's unleashing a full-court press to convince her that he's the real deal. She's slowly falling for his sweet, rugged charm, but with so much on the line, Olivia has to decide whether Ben can truly change---or if he's just playing the game.

Maybe This Love is the second book in this series. It follows Ben and Olivia. I thought I would give this book a chance, after finishing the first one.

I liked Ben in this book. Ben is the oldest of the Westmore clan and has been playing in the league the longest. He is also supposedly the biggest play-boy, egomaniac. I just kind of felt that he was a bit misunderstood, and that the only thing that really made him seem like a play-boy was his ring tone on his phone. I found that Ben was a total sweetheart, that kind of found him in a sticky situation.

I'm not sure if I liked Olivia or not, even by the end and I'm still not sure. I kind of found her a bit judgemental. And her back and forth gave me whiplash.

I thought that this was a nice addition to the series. I always love seeing the Westmore boy's together and love their family dynamics. There was some inconsistency with some the time hockey

Disclaimer: I received an ARC of this book for my honest review. The opinions in this post are 100% of Busy Bumble Bee Book Reviews and may differ from other's.