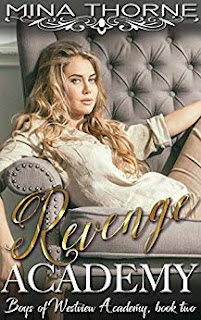 I thought I was going to die after suffering the worst humiliation of my life.I never wanted to go back and face my classmates at Westview Academy again.And I never wanted to see my stepbrother Barrett's cruel, beautiful face again.But life would never keep me down for long, I had a fighting spirit that would rise up and help me get to the bottom of my betrayal.Who had set me up like that?And who deserved my love?Could I trust anyone at Westview Academy, or would they finally break me down and destroy my spirit?** This is book two in the Boys of Westview Academy serial. Book three is coming soon.

OMG.... OMG.... NOOOO.... NOOOO.... NOOOOO.... Why did I read this one so soon?.....I really should have waited to read this one until the third one came out. Because I need the third like ASAP!!! Like seriously RIGHT... FREAKING.... NOW....Thankfully this book starts right where the first book ended at the party where Stephaine gets embarrassed with the pictures. Which I'm glad this picked up right from where the last one ended, because sometimes in series that doesn't happen and they jump ahead a few months. But like I said luckily this one picks up right where it was left off in the last.So I was hoping that Stephaine was going to come back stronger in this one and get her revenge. And even in Stephaine's thoughts and her words to Whitt and Barrett, she said she was going to get revenge. And it seemed like she was starting to look for who set her up. But then it just kind of fell off as she started getting accepted by people. I'm really hoping that Stephaine comes back with a Vengeance in the third book and sticks to getting back at these people and doesn't let it all slide again.I'm really hoping Barrett wasn't double-crossing Stephaine and comes back to help her out. I'm kind of hoping he's out there trying to figure out information for her.And Whitt.... Oh Whitt.... I'm really really hoping that wasn't him in his vehicle at the end of this book. I'm really hoping like Mason took it or something. Or if it was Whitt, I'm hoping he's being blackmailed by Becca or something. But I'm sticking with it was Mason in Whitt's vehicle or someone else in his vehicle.So I did enjoy this book a bit more than the first. There's definitely a lot more happening in this book. I will say I did catch a few grammar mistakes here and there. And also a few places where there probably should have been different words than the ones used. But other than that overall I thought the book was good. Still can't stand her step-mom and honestly think she's behind A Lot of what's going on. I probably should go back and write my review for the first book now that I'm writing one for the second.I'm giving this book 4 Stars out of 5 and need the third book right now!!!