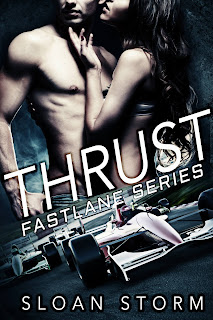 From the instant I met mysterious, hard-bodied Formula One driver Marco Rhys, he took charge - leading me on a red-lined, wild ride into his world.

But I'd vowed to never give a man control of my life. Ever. It was my unbreakable rule, a principle I promised to never compromise - no matter what.

So despite his rock hard abs, devilish good looks and charm to match, I felt sure I'd rise to the challenge. After all, I'd handled my fair share of billionaire playboys in my short career and never failed to deliver. I had too much at stake, and too much to lose if I failed.

If I couldn't sign Marco to the investment firm I worked for, I could wave my dreams goodbye. Everyone who said I would never amount to anything would be right.

But I didn’t count on the unstoppable force of Marco Rhys.

Everything depended on our battle of wills. One of us would have to conquer the other in the boardroom or the bedroom.

Which one of us would surrender first?

So I like finding new authors, at least new to me authors. And Solan Storm is definitely a new author to me. I wanted to read this book because the cover totally pulled me in. I was like, "Oh a racing book. Something new and refreshing to read."

I completely didn't realize this was the second book in the series. Though I don't really think that makes much of a difference. I wasn't really sure what to expect going into this book.

I have to say I liked the beginning of this book. I thought it started off interesting and the author brought into the story and made you want to know more.

But that's about where it ends for me. Somewhere along the way the storyline became a bit strange to me. And the characters just kind of got on my nerves. There also was no racing in this story. I would have thought there would be a bit of racing in it. I will admit though there were some hot scenes that made up for it.


Disclaimer: I received an arc of this book from Give Me Books for my honest review. The opinions in this post are 100% of my own and may differ from others.