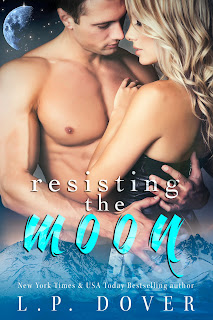 The past was pain.
The present unclear.

For Tyla Rand, her future couldn’t be bleaker. Death follows her everywhere, especially behind those she cares about. Being a member of the royal pack, she believes her time of happiness will come. That is, until wolves from her old pack show up missing. Her mission is to find them, but she won’t be going alone.

Sebastian Lyall, a true born royal and the one man Tyla loathes, has offered to help in her quest. Their journey not only brings out their true desires, but attracts the attention of another, someone from Tyla’s past. However, nothing is as it seems. Death is not done with her and now he wants her to pay. He won’t be satisfied until he’s taken everything away . . including those she loves.

I have been a fan of Mrs. Dover's ever since I read one of her books. Which was Roped In and than the first book in this series Turn of the Moon.  Roped In is where we actually first meet Tyla. You don't really have to read that book to understand this one. This book is a standalone, but if you want to see where we first meet Tyla than you may want to go read Roped In.

I loved Tyla. She was a refreshing character. She's smart, independent, loyal, a hard worker, and a bit sassy. Her and her parents have been on the run ever since their pack was attacked. I think she partly feels like its her fault and has that resting on her shoulders. That is until she gets a phone call that changes everything.

Oh how I loved Sebastian. Even though he liked to come off as the co*ky confident player. We learn that he really isn't that way. He's such a sweet, caring, loyal, protective person. And evidently has the patience of a saint when it comes to his mate.

I have to say I love shifter books and this genre of books is one that I'm very picky about. It's either a hit with me or a miss. I really don't want to give anything away in this book. But this book starts off with a bang. It has some humor, mystery, drama, and action. There's some secrets and I mean big secrets revealed. And of course you can't forget the smoking hot scenes.

I really enjoyed this book and was so glad I was given the chance to review it. As I said above I've been a big fan of Mrs. Dover's since the first book of her that I've read. And even though technically I've only read three so far I can't wait to go back and read the others.

Disclaimer: I received an arc of this book from enticing journey book promotions for my honest review. The opinions in this post are 100% of my own and may differ from others.