Disclaimer: I received a free copy of this book from Netgalley for my review. The opinions in this post are 100% of my own. They may differ from others. 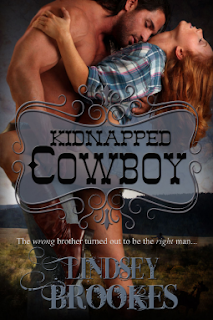 
After countless attempts to speak with the owner of the retreat for troubled teens she runs on the outskirts of Lone Tree, Montana, Caitlin Myers resorts to kidnapping Brandon ‘The Ogre of Lone Tree’ Barnes in a desperate attempt to change his mind about turning Stoney Brook into a vacation resort for the wealthy.

Retired rodeo star, Dalton Barnes, gets the surprise of his life when he’s abducted by a soft-spoken female with a ‘gun’ and taken to the retreat his family owns. He soon learns she’s kidnapped the wrong cowboy by mistake. She wanted his brother. Things go from bad to worse when a late spring snowstorm strands them together at the cabin. But it’s during their snow-in that Dalton learns why Caitlin has gone to such lengths to save Stoney Brook. Having had issues with his older brother himself and a not so happy past, Dalton promises to do what he can to help her.

When confronted Brandon tells Dalton he’ll hold off on his plans for the retreat, but only if Dalton agrees to stick around and help run it. Keeping his promise to Caitlin, Dalton agrees and what starts out as a common goal to turn the troubled teens’ lives around that summer ends up turning theirs around as well. Can a man who has always avoided putting down roots and a woman with a deep-seated fear of abandonment hang on to the happiness they’ve found together? Or will the past return to threaten their newfound love?

Love, laughter and a heartwarming read…

The last couple of months I've been looking for more books to read. I read so quickly. I at least read 2 or 3 books a day. And most of those books I've already read twice or three times already. But my point is the last couple of months I've been reading a lot of Cowboy romances. I luckily came across Kidnapped Cowboy on Netgalley and thought I would give it a read.
I have to say Caitlin's character at first came off funny, strong and determined. She is a woman who believes in what Camp Stoney Brook stands for. Caitlin's character obviously has some trust issues. Although I do have to say Caitlin's character kinda dwindles towards the end.
I really liked Dalton's character from the beginning also. Even though he let a woman kidnap him with a curling iron. He's obviously trying to figure out what he wants in life and prove his brother Brandon wrong, when he agrees to help Caitlin with the camp for troubled teens. And I definitely wouldn't mind kidnapping Dalton for myself.
This was a good read and would definitely give it 4 out of 5 stars.