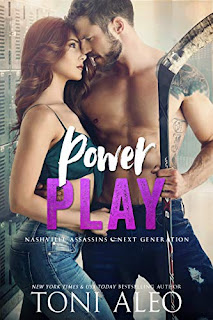 Posey Adler is coming home. After a devastating journey for what she mistakenly thought was true love, she is saying to hell with men and love forever. As the Nashville Assassins’s new assistant coach for special teams, Posey is ready to focus on her job and have the attention on her for a change. She’s been haunted by her place in her sister’s shadow, but this is her chance to shine and force her family to take notice. But in order to make a name for herself, she’s going to have to go toe-to-toe with her team’s leading power play scorer.Boon Hoenes lives for special teams. The power play is his favorite thing about the game. He loves having that advantage over his opponent. And most of the time, it’s his quick thinking that sends the puck to the back of the goal when he’s on the ice. Off the ice, however, no amount of quick thinking prepared his heart for being dumped by his college sweetheart. Boon has sworn off women, but when Posey Adler comes onto his ice—and kicks him off his beloved power play—he decides she’s one woman he doesn’t want to swear off.They’ve both been hurt, but instead of going in for the penalty kill, Boon is ready to convince Posey their hearts are the secret to how they’ll win.How they’ll score the ultimate goal.A forever kind of love.

So I'm not going to go into my usual speal about how Mrs. Aleo is one of my go-to authors. How I've read every Assassins book that has come out. How I was a fan of Mrs. Aleo's before she even published her first book. Or the fact that I followed her on a little site named Booksie. Woopsie's I'm babbling here.

If you don't know who Posey is than I'll tell you. Posey is the youngest daughter of Elle and Shea. I loved Posey right off the bat. I like her much better than her sister Shelli. Posey is sweet, kind, smart, and funny.

I loved Boon. He's sweet, kind, protective, and also funny like Posey. I thought that they were the perfect match for each other.

I loved this book from start to finish. I couldn't put it down from the first word to the last. There was plenty of funny moments mixed in with touching ones. There was also plenty of smexiness mixed in. I also loved Wes in this book and hope he gets his own!!